Singing in and to nature

In the past I have recorded myself singing and placed speakers playing my voice in the landscape, in tree hollows, in the undergrowth and in caves. I embraced the background noise of the elements, something out of my control, and viewed the wind and rain as music just as much as the actual singing. This idea came from looking at John Cage and his piece 4'33". By composing a piece where the instrument or singer does not play or sing anything for the duration of the piece, he was not creating a "silent" piece but drawing attention to the ambient sounds of life, and by presenting them in the context of a concert hall he expanded the expectations and dialogue of how music is defined. My focus shifted from the elements being a background noise to focusing on them and using nature as an artistic collaborator that I could interact with and ultimately duet with. I began recording myself singing live in the landscape, and the focus was taken off me and what I sounded like, and put onto the wonder and beauty of nature. It became a mindfulness exercise for me, not performing to an audience but performing to and with the natural world. 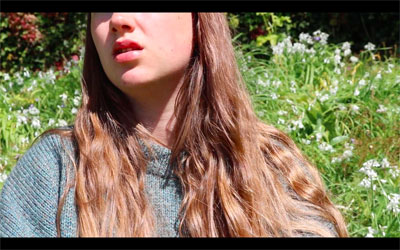 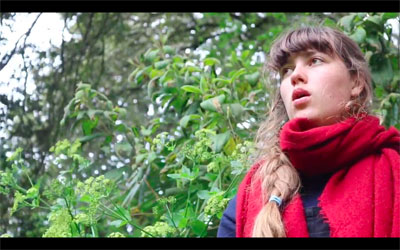 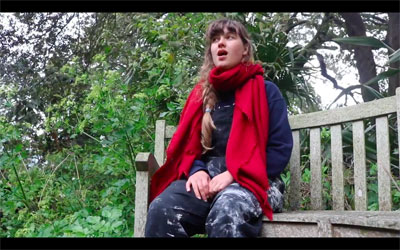 Improvisation with the Wind – Rebecca Kent

I have been interested in the idea of vessels, particularly as a way to hold or present my voice. With this shift in focus from the elements being a background noise to the wind and rain being at the forefront of my work, I began recording the wind. I have been interested in wind for a while, particularly looking at links to breath and life. I found that the original Hebrew word for wind, Ruach is the same as the word for breath and spirit.

I experimented with the best way to amplify the sound of the wind, and found the best way to record it was to open my backdoor very slightly so there was a small gap, and open the front door at the other end of the house wide. By recording this I realised just how musical nature can be, if we only stop to listen and broaden our expectations of what music is. In these works I placed a speaker playing the sound of the wind into a pot inside the house. The videos are really a documentation of an installation/performance work. Having a howling gale appear to come from the depths of a pot gives a sense of a whole other world being let out when the lid is taken off. The echoes and rumbling of the vibrations through the pot became quite intense when viewing the work in person.

In most cases you can click on an image of a video piece to see the full film on YouTube. 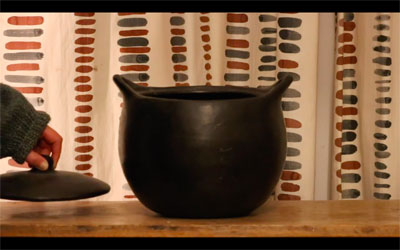 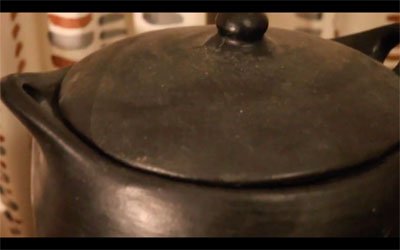 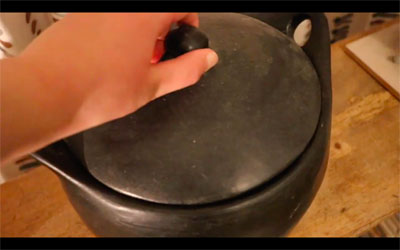 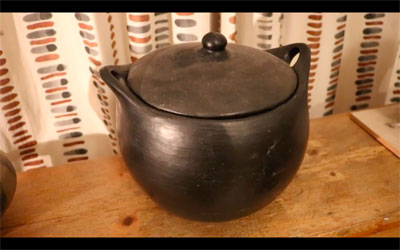 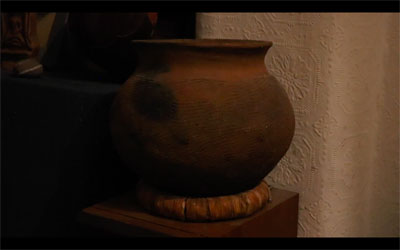 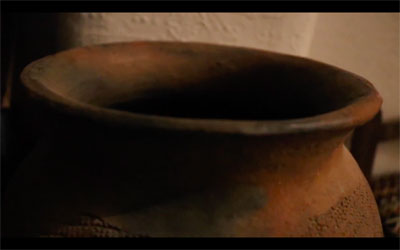 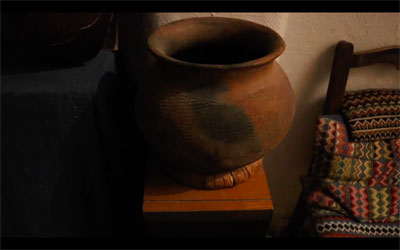 Elemental Paintings and their Process

Chance has been a big theme that has run though much of my work, particularly the idea of giving up control as the artist. Nature and the elements have been a focus for this reason, often being unpredictable and uncontrollable, and I have tried a few ways of utilising this quality in my own work. I have made work on paper using the elements as part of the process, using raw pigment as a medium. I sprinkled the dry pigment onto the paper and the took it out into the rain. Where the rain hits the pigment it stays on the paper, mixing with the rainwater and turning into paint that stays on the paper. I also utilised the wind in these drawings, hanging a paintbrush from a tree and letting the wind move the brush across the paper, spreading the wet and dry pigment into an unpredictable composition. When the wind wasn't strong enough the move the small brush I attached a paper "sail" to the wire in order to use the full force of the wind. I have made a compilation video of the process of making these elemental paintings. 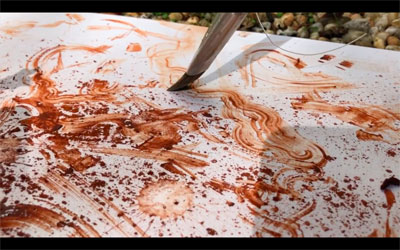 I feel these visual representations of the elements are successful, but I also wanted to bring sound into it, and find a way to create a piece of music or sound work as an audio representation of nature. I considered making an instrument that could be played by the wind, rain or sea, such as a wind chime or Aeolian harp, but in the end I decided to use the paintings I had already made, not just as drawings but as music scores to play from. Some of them are so loud as visual works, you feel you could almost hear them just by looking at them. Some in particular remind me of the work of Wassily Kandinsky, an abstract painter influenced by music and sound, suggesting that sounds could be communicated through his paintings.

Having decided to use these drawings essentially as sheet music, I had to figure out exactly how I would read them. Because they are not time based, I had no boundaries for how long the piece should be, and no direction where I should start on the page, or even which way up the drawing should go. I decided to make some more elemental paintings, but this time I would draw out several five-line music staves onto the paper first. This way it is much clearer how to read it and how to translate the drawing into sound. I used pigment again on top of a set of staves, but I also used watercolour, making sure the lines were still wet when I placed the paper outside. Where the rain hit a line of a stave, it would create a blob of water that would immediately be filled with ink, creating the appearance of a note on a stave. It depended on how much it was raining, whether I got a minimal, formulaic piece, or expressive washes of tone that I had to play more intuitively.

Click on any picture to see a slide show of the complete set. 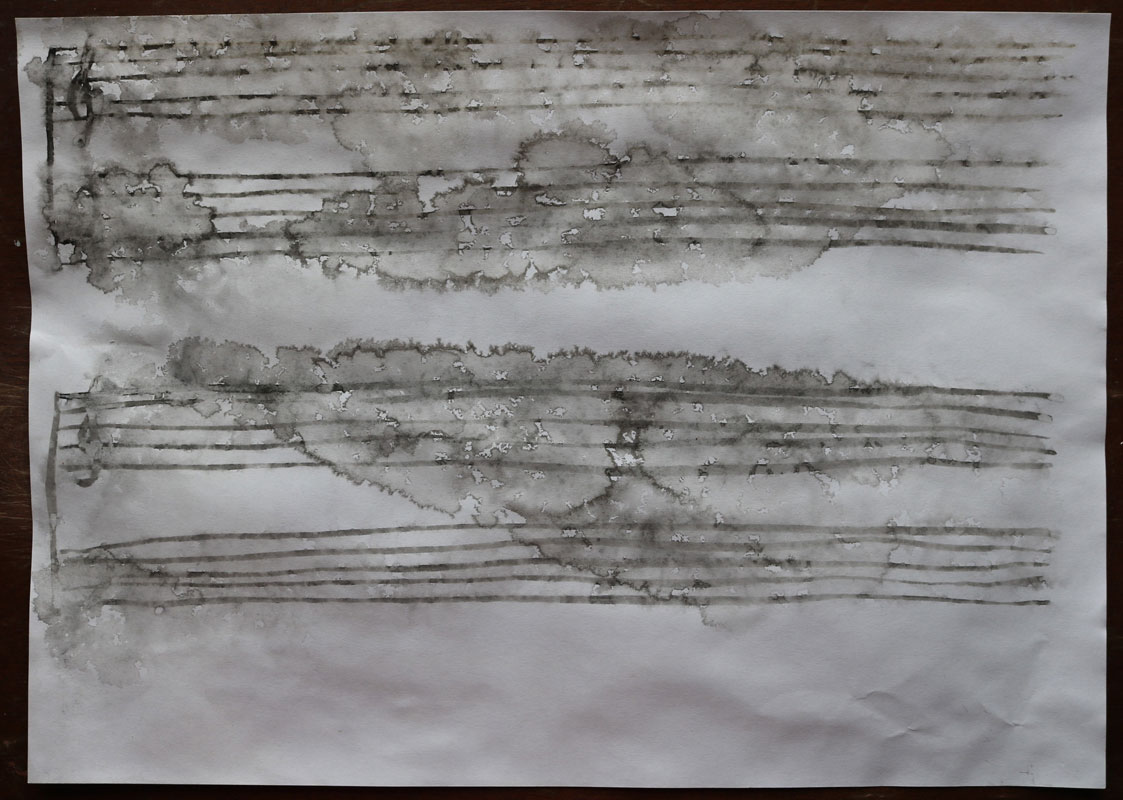 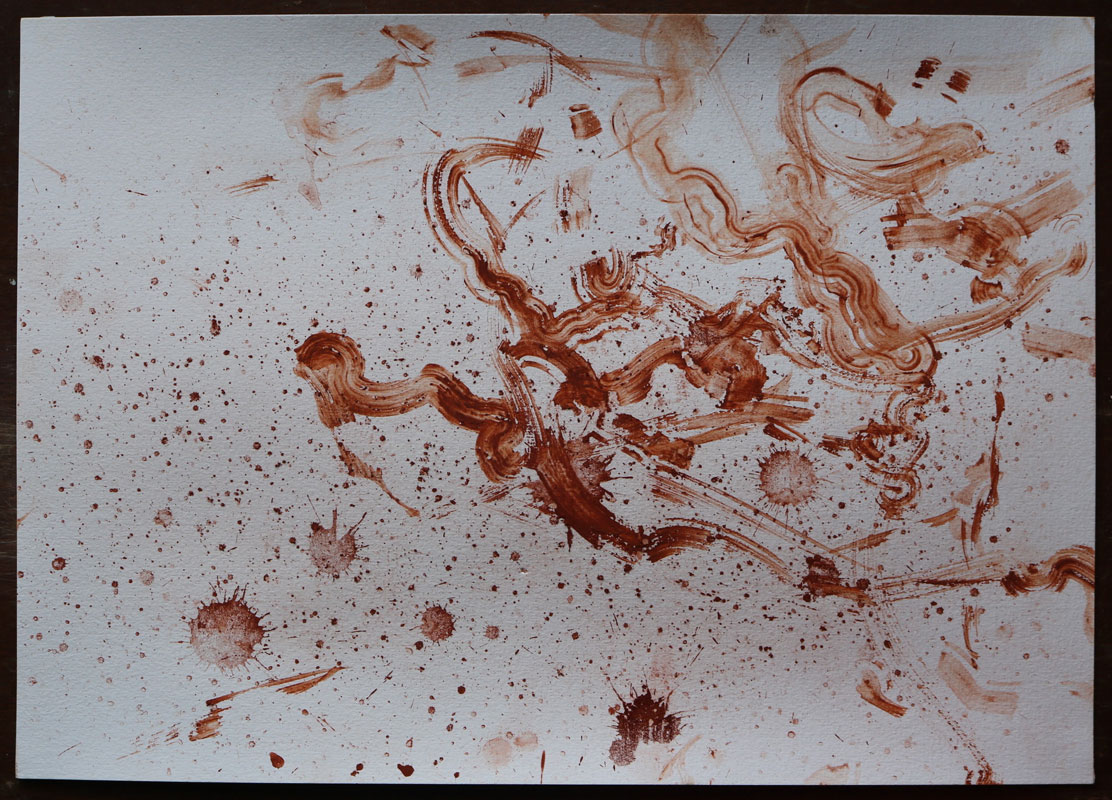 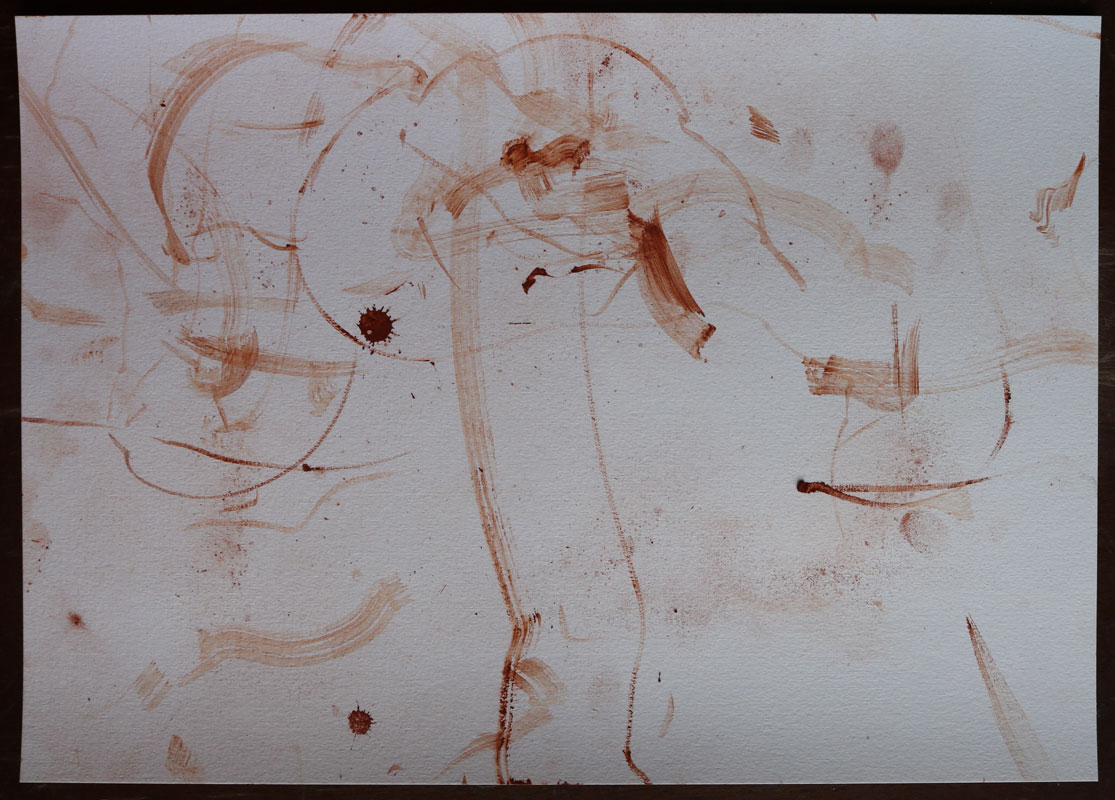 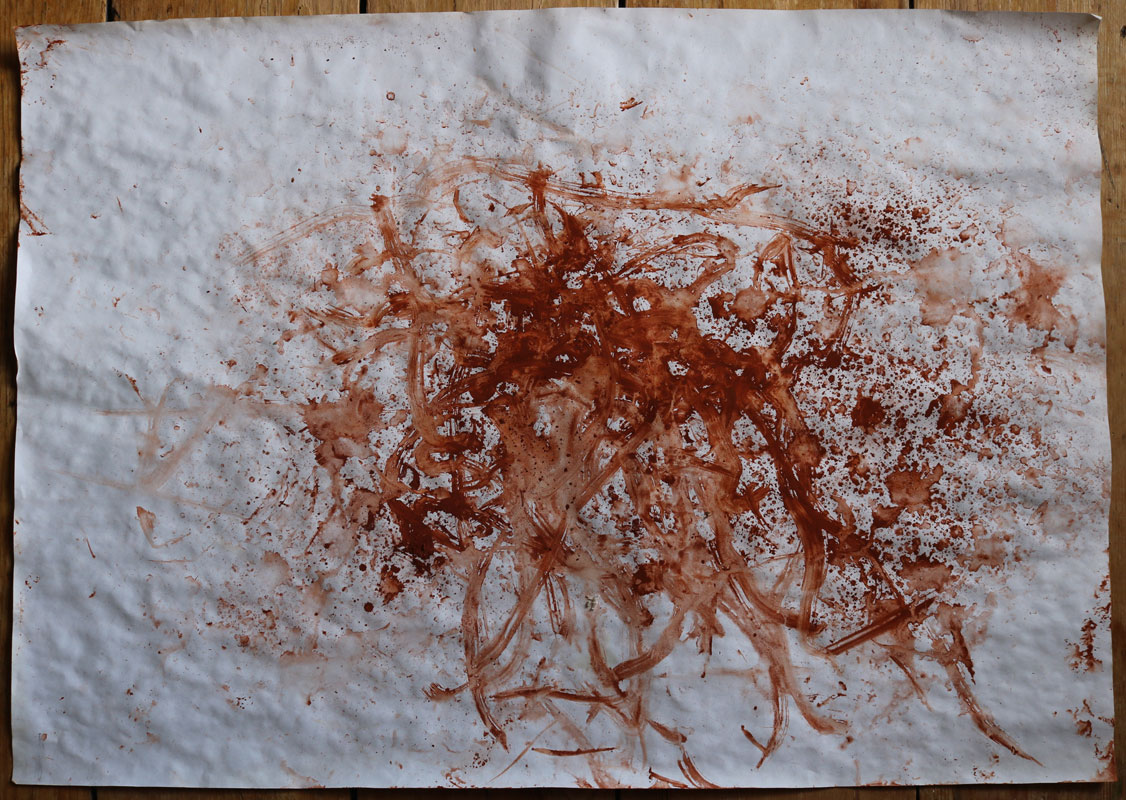 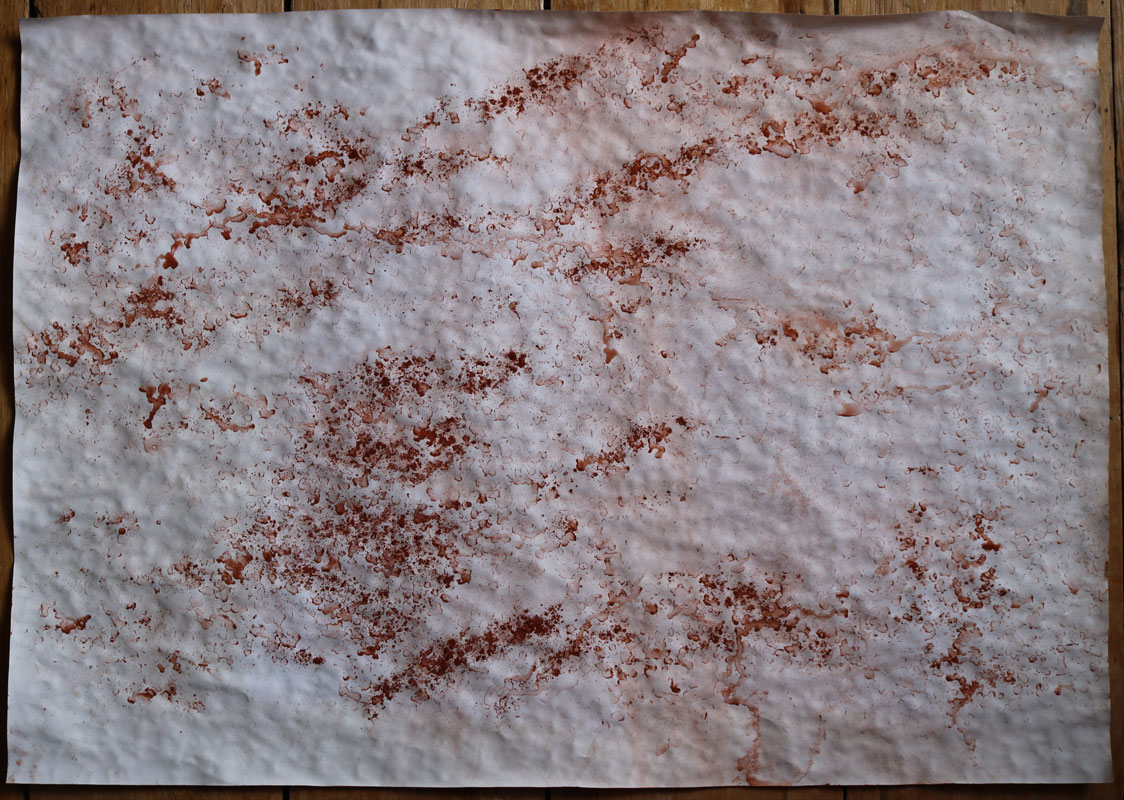 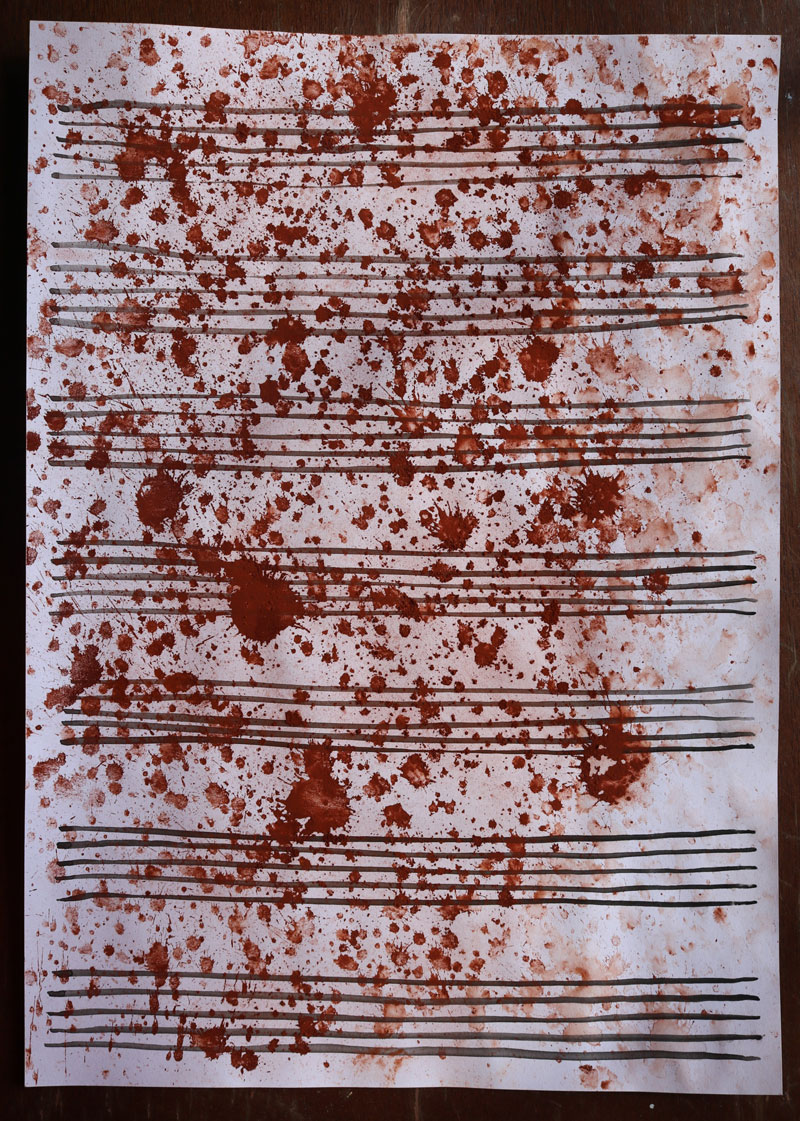 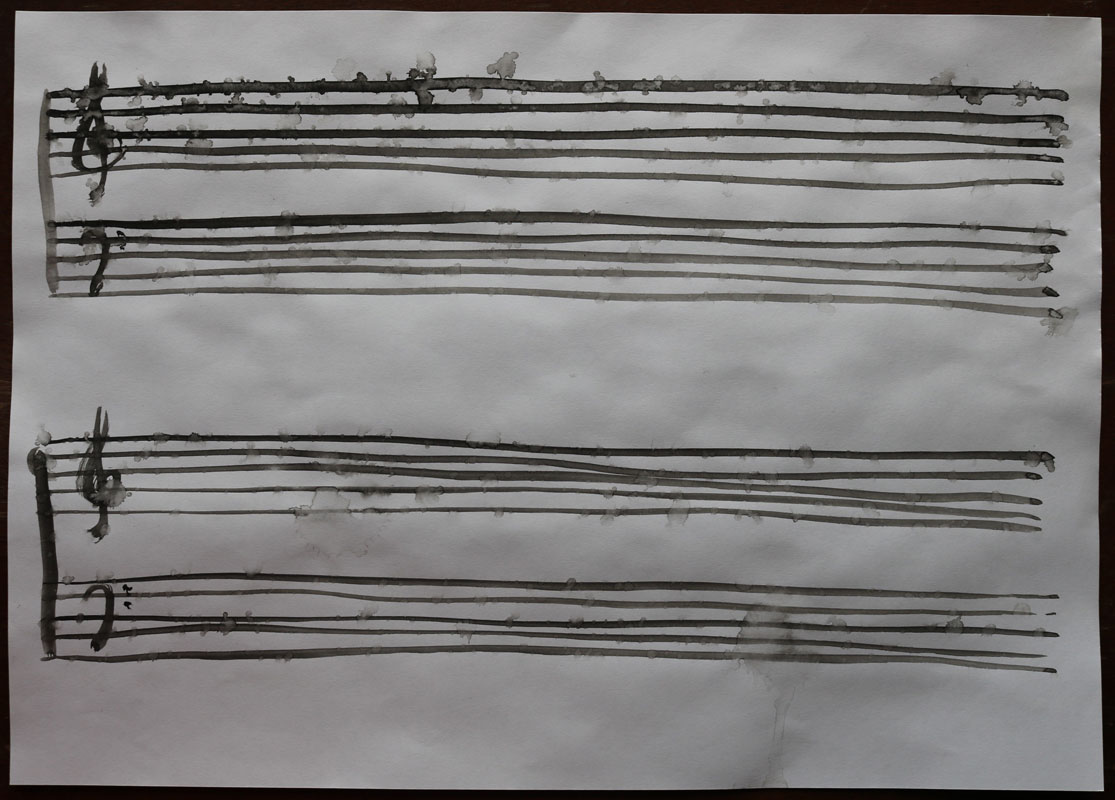 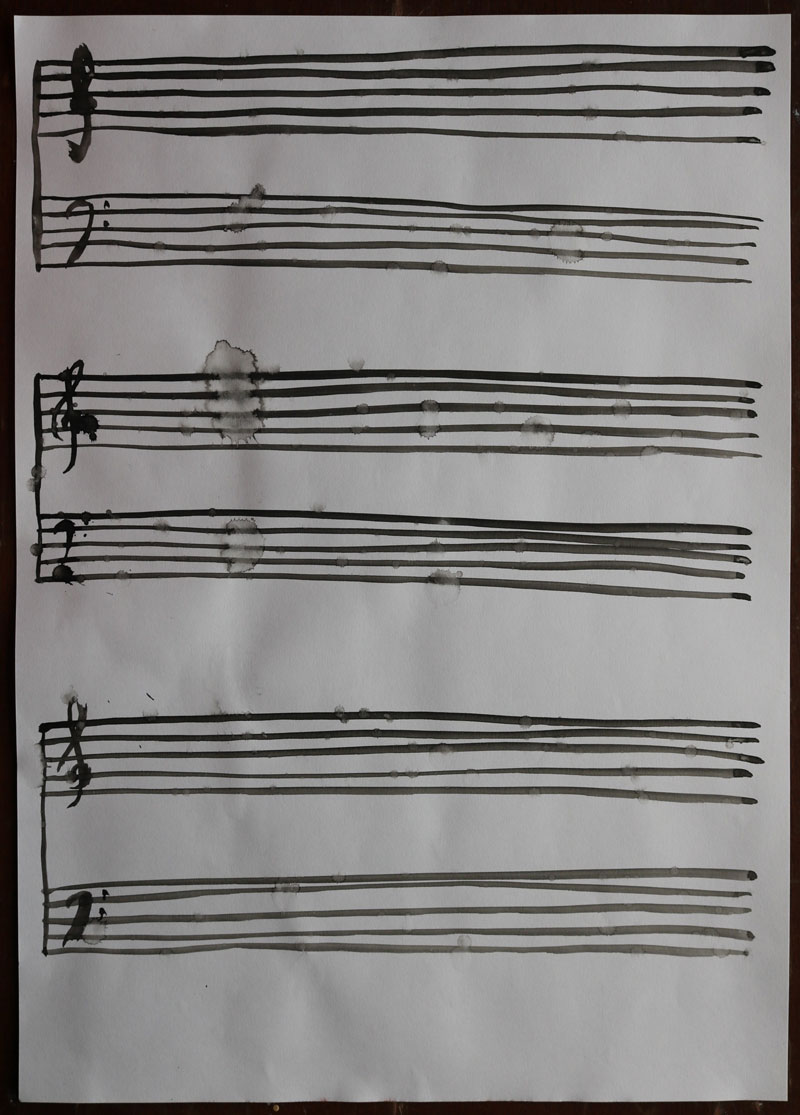 I recorded myself singing an improvisation based on some of the rain and wind paintings. They are very intuitive and are made to be viewed alongside the visual "scores". I also improvised on the piano using these as sheet music to play from. 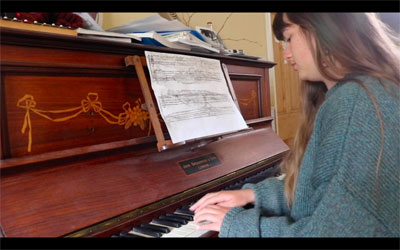